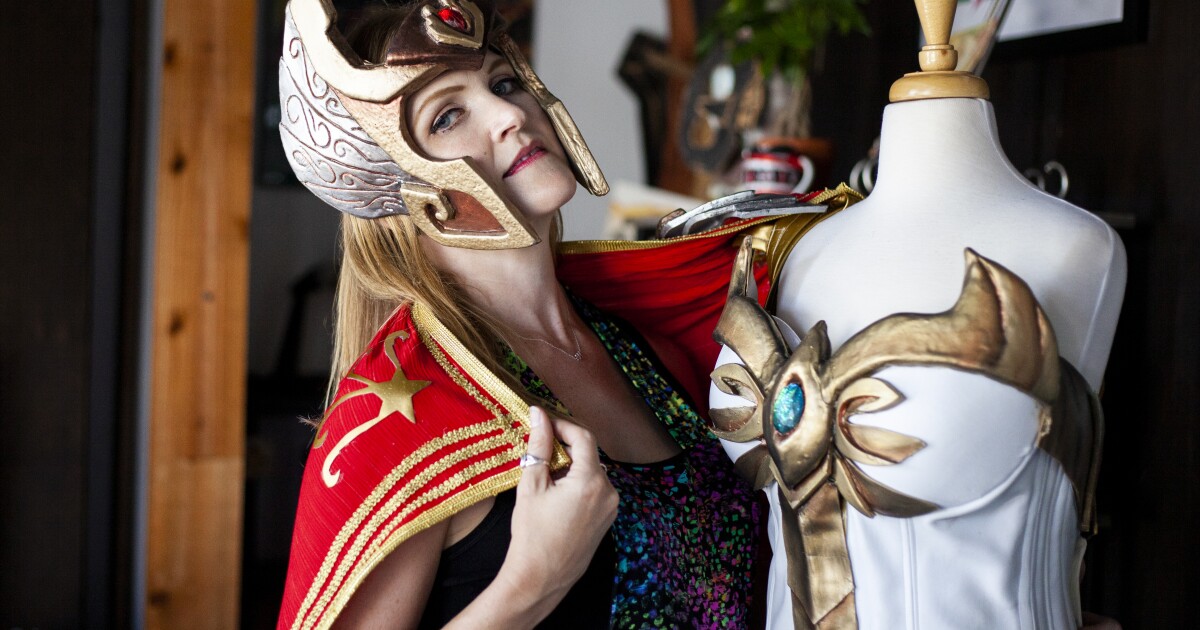 The companies that made Renetta Lloyd’s beloved cuddly toys when she was a little girl really had no vision, style, sense of fashion when it came to the wardrobe options available for their furry friends. Little Renetta was not deterred.

“I’ve made it my business to make clothes for my animals out of my mother’s scraps of fabric,” says Lloyd, now 37, cut it out twice and sew the edges together. As I got more practice, I loved the challenge of figuring out patterns for all of the strange animal body shapes. “

This early cultivation of creativity led her on to becoming the artist, costume designer, and cosplayer she is today, with a cast in August at the Backfence Society in downtown Vista. The Society is a local not-for-profit organization that supports North County artists and works together to create interactive arts events. In her cosplay-centered artist occupation, she works on three costumes using skills and techniques such as sewing, beading, makeup, wig making, hot mold foam, spray painting, and wiring LEDs.

Lloyd owns and operates Natty Lou Creations, where she designs and creates costumes for local theater groups in San Diego County. She lives in Vista with her husband Paul, their daughter and their son. She took some time to talk about her art, her stint with the Backfence Society, and her Behavioral Science degree to work full time.

Q: Did you request this first sewing machine for your eighth birthday or was it given to you on a whim? Tell us about your love for sewing and how it started.

A: My mother was and is a great seamstress and has always created things like chic smocked dresses for me and others. She showed me the basics of hand sewing from a young age, but I soon decided it wasn’t going to be fast or safe enough for the things I wanted to make. So she patiently taught me how to use her machine. I started using it so often that I was often in the way when she had projects to work on. I think the decision to give me my own machine for my eighth birthday saved everyone a lot of frustration.

Q: What have you done to further cultivate this particular creative expression as you age?

A: At some point I started using real swatches and sometimes asked to buy certain fabrics instead of just the scraps my mom had collected over the years.

When I was about 10 years old, my brother and I got involved in youth theater in the area. It didn’t take long for the people who led these groups to find out that my mother could sew, and she was used to sew costumes for productions. It was at this point that she and I began to develop a love for period costumes and clothing, and gathered a library of period fashion picture books to use as reference (before the time when you could just google anything you wanted). I spent hours looking through these books, marveling at the evolution of fashion through history, and studying. We spent a lot of time together in fabric shops, shopping for productions, and I ended up helping her with almost all of her costume work.

At school, I took art classes that helped me draw the designs that my mother and I had created. Whenever a director wanted to approve a design before we did it, my mom would let me draw a rendering of it to show him. As a teenager, I took a fashion illustration course at Palomar College to improve these skills.

Q: Have you ever done something to wear?

A: I think I started doing things for myself when I was in middle school. My father was especially grateful that I had never bought expensive fashion. If I ever saw something that I really liked but couldn’t afford, I could usually just make a version of it. I also modified a lot of clothes from thrift stores and added my personal flair. I saved a lot of money by making my own prom dress and Halloween costumes.

The first complete outfit I can remember was a babydoll style summer dress. It was made of yellow and blue cotton with daisies on it. I think it was buttoned in the back because I was nervous about zipping it in. I added a blue ribbon around the empire seam that was tied in a bow.

I used a pattern for this dress like I did for most of my first wearable projects. Using patterns was a great foundation for learning the shapes and order in building objects. Patterns can be expensive for a teenager, however, and I had a cat who enjoyed nothing more than tearing up and crumpling pattern paper once it was laid out on fabric. After a couple of years, I decided it was easier for me to skip the patterns entirely. I don’t know if my cat, Mr. Bill, ever forgave me for taking away his fun.

Q: Why behavioral research? What were your plans for this subject?

A: I took a psychology course with Mira Costa, which fascinated me. I realized that I really enjoyed studying the motivations behind people’s behavior. I also really wanted to have a career that was about helping people. I figured that a behavioral degree would be a great starting point for any kind of “helping” or therapeutic career.

After graduating from Concordia University in 2005, my husband and I married and we both had high student debts. We had to work to make a living and there aren’t many job opportunities with a behavioral science degree unless you get at least a masters degree. We couldn’t afford that at the time, and I wasn’t sure which area of ​​study to focus on, so I dressed up and worked other jobs until we started having kids. Fortunately, at this point my husband was making enough money to allow me to stop working full-time, so I continued to dress up on a more flexible contract basis. Now I am finally considering a master’s degree, which I hope can start next summer. I want to become an orthopedic technician / prosthodontist. It’s a career that is a perfect blend of my passions: working with my hands to create unique creations and help people.

What I love about Vista …

We live just up the street from downtown Vista. We love that we can walk our dog down the street and eat in so many wonderful restaurants, visit the Backfence Society or say hello to our friends at the Broadway Theater or have a beer or ice cream in the many breweries Tree Frosty. Vista is a pretty great city, and I’m glad we live so close to our hearts.

Vista, CA – August 05: Renetta Lloyd poses with her cosplay creations at the Backfence Society in Vista, CA. Lloyd is the featured artist in August for the Backfence Society, a nonprofit that focuses on helping North County artists and co-producing interactive art events. (Brittany Cruz-Fejeran / The San Diego Union-Tribune)

Q: Tell us about your stay at the Backfence Society this month.

A: I am happy to use this room as a workshop. I started several cosplay projects last year to prepare for conventions (mostly WonderCon and Comic-Con). When the world collapsed, I put all my advances in a trash can and haven’t pulled it out since. With a little space to spread out here in the Backfence Clubhouse, I can get started with these designs again. I also have a couple of assignments that have come up recently that I can work on.

I will officially be there until shortly after Labor Day. My hours are kind of everywhere, but you can find them in the calendar section of backfencesociety.com.

Q: Why Cosplay? What do you like about this style?

A: Oh wow, where do I start? My immersion in the cosplay world only happened a few years ago. I have a wonderful friend who has been attending conventions for years, and I have so admired the inventive cosplays she created for herself. When she and I started working together more, she offered me a ticket to WonderCon in spring 2018. For years I had dreamed of recreating the “Martian Girl” look from the Tim Burton movie “Mars Attacks!” I’m not sure why, other than the fact that I’ve practiced her iconic gait for years. This was the perfect opportunity for me to create a challenging and fun costume for myself.

After that first day, when I walked into stumps with my feet in uncomfortable shoes, couldn’t sit or breathe because of a drawn corset and sweat profusely under my huge wig, I was addicted! (It takes a bit of a masochistic personality to really enjoy cosplay.) I felt like a celebrity posing for pictures on the red carpet and being the object of so many “oooohs” and “aaaahs”. I started doing research on YouTube and learned all the tricks and techniques for making armor, weapons, crowns and anything else I liked. While costume and design for the theater is definitely an art in its own right, cosplay really gave me the opportunity to use a wider variety of artistic skills and power tools. I also love the unique aspect of cosplay. At a convention, you might have 20 people representing the same character, but each of them will be a unique creation. From fairly amateurish to amazingly professional, the cosplay community seems to embrace and encourage anyone who gets involved.

Q: What’s the best advice you’ve ever been given?

A: “Family comes first.” There aren’t a lot of people in the area who make costumes, so sometimes I get overwhelmed with inquiries. If I feel like I’m sacrificing too much time with my kids, then the job is just not worth it. I’m sure I’ve offended some people by saying no, but I’m trying to take better care of my own mind and the well-being of my family.

Q: What would be one thing people would learn about you?

A: I still appear in theater productions. In fact, I’m on a show that opens on August 20th at the Star Theater Company in Oceanside. It’s a comedy called “Air Turbulence” written by Daniel Watts. I play a flight attendant named Erin and made my own costume for the show.

A: My ideal weekend has a nice mix of family time, time outdoors, and relaxation. Taking the family for a walk, going to the beach, seeing a show, taking my daughter to a riding lesson, taking a karate class with my son, having a sushi date night – all of these can be done in ours most of the year beautiful country.

Where Does Caleres Inc (CAL) Stock Fall in the Footwear &...